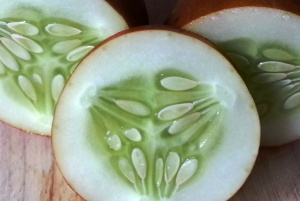 Sliced Poon Kheera Cucumber – This looks a little over ripe, but the seeds are soft and edible, and it is super juicy

A quick post to sate my enthusiasm for something quite humdrum.

I find myself getting excited about a lot of unusual vegetables these days, so here is another ramble about new favourite veg of mine. It is called Poona Kheera and it is an Indian cucumber.

I had few cucumbers rambling around the greenhouse earlier in the year but they were past their best and I thought I would try something different, even though it was quite late in the season. So when I ordered some weird herb seeds from The Real Seed Catalogue I bought some Poona Kheera seeds too.

I’m really really impressed; tasty to the point at which you might confuse them with a ‘not quite sweet enough’ honeydew melon, and really quick growing. The seeds were planted in the middle of July, and after a pretty cool and unimpressive August, the first ones were picked on 10th September, so less than 8 weeks from seed to fruit, pretty amazing.

We chop these into triangles and eat them on their own, more flavoursome even than more traditional varieties, and prolific too. 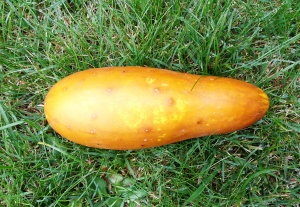