About 3 weeks ago I wrote a piece on moving chilli plants outdoors. It is often difficult to judge when it is OK to do it, and it is always a compromise, it is where I live anyway.

So I thought I’d update people as to what my plants are up to. Generally, I keep all mine in the greenhouse until they grow so big I have no choice, and if any go outside I’m always picky and try to keep the best ones under glass.

This time, just as an experiment I planted one outside on our patio in a stone pot to see what happens. I did this much earlier than I would normally do, but in doing so I was mimicking the dilema which most chilli growers that don’t have a greenhouse. I also put one in a raised bed, and kept the others from the same batch inside.

And after about 3 weeks, here are some results. 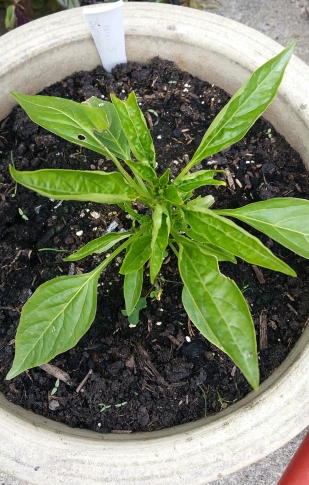 The outdoor plant has had some pretty good weather, not perfect, but OK. It has had warm days and cool nights to start with, some rain, a fair bit of wind, and not too much in the way of pest damage, just a couple of nibbled leaves as you can see. But this has still taken its toll, down to 8°c on some nights, some cool winds and a max of maybe 23°c in the day times isn’t ideal. The leaves are curled and quite tough, but mainly the plant has grown slowly, maybe 20cm high and hardly branched out with not many extra leaves, though it is starting to flower.

I stress that this plant hasn’t been neglected at all, it has beeb watered whenever it needed it, fed, staked, and moved about to shelter it from the worst of any wind. 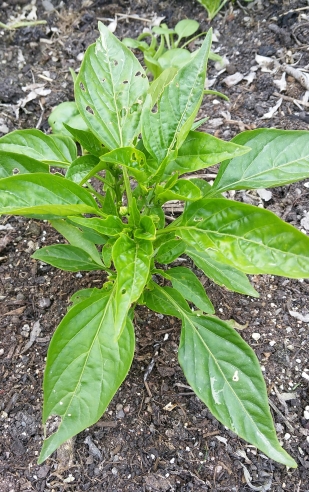 The one in the raised bed (above), has fared better. The leaves have toughened, but not curled much, it has more side shoots and the flowers are more developed. This is because it has been protected from the elements with green mesh around and over the bed too stop the wind and raise the temperature, the soil temperature is warmer and more stable too. 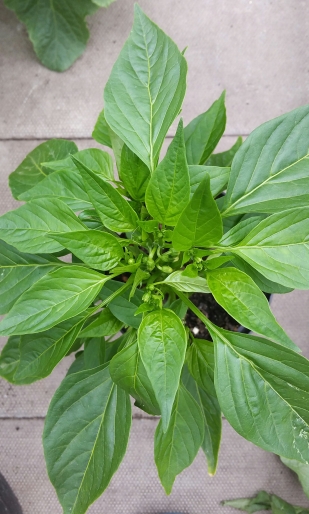 The third one (above), has been kept in the greenhouse all the time, and has grown a lot more. It is taller and probably has twice the amount of foliage than the outdoor one, there are more side shoots, more flower buds and it is looking generally more healthy.

All these plants are the same variety, grown alongside each other until they were separated for this experiment. They are a variety called Nigel’s Outdoors, not one I have grown before, nor one I am familiar with. The seeds came to me as part of a swap I did with Alex the Air-Pot Gardener, a friendly chilli grower here in the UK. I assume it has been bred, (no doubt by someone called Nigel), to be more tolerant to the conditions of my experiment. Other varieties may not have fared even as well as this one. I suspect a similar experiment with habanero plants would have resulted in the outdoor plants not growing at all.

So what is the lesson here?

Watch this space for another update in a few weeks. I suspect we might be picking fruit of the one in the greenhouse.

I grew the Carolina Reaper for the first time last year, so I thought I’d relate my experiences and give a bit of info on what to expect.

This is the current record holder for the hottest chilli in the world, over 1.5m SHU.

I have probably grown most of the very hot ones over the years, but I don’t grow an awful lot of them as I’m not mad keen on super hot sauces and I find them quite difficult to offload onto other people, either as seedlings, mature plants or fruit. I obviously move in the wrong circles, most of my friends are happy to take anything I give them, but whether it is plants or fruit, they tend to prefer milder stuff. 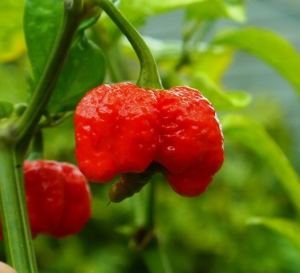 The seeds, which came from Nicky’s Nursery and germinated well. I got 7 out of 10, which is pretty good going. On milder chillies I would expect 9 or 10 out of 10, but I am happy with 7 in this case. I always bang on about how difficult some of the very hot chillies can be, and how you have to get conditions absolutely right to get good germination but I’d say these performed well, proving that the seed stock was of good quality. I germinated them next to some Bhut Jolokia which did almost as well, so I must have got conditions right as Bhuts are very temperamental, susceptible to drying out or temperature fluctuations at critical times, and often take a long time.

These were all germinated in a heated propagator, in the region of 28-32°C and with constant humidity, and most were up within 12 days. More on germination times here. I used to use capillary matting in the bottom of propagators but these days I use about a cm of slightly moist sand to maintain a more steady level of warmth and humidity. This takes away the need to water the seed pots much at all, and the sand dissipates the heat coming from below so the pots don’t dry out from the bottom up. Once seeds have been planted in moist soil & vermiculite there probably won’t be much evaporation as the propagator lid is closed, so they won’t need to be drenched every day. As soon as seedlings start to emerge in a pot I move it to another propagator with a more open lid (or none at all)  to give them more air flow.

I started the seeds along with most of my others, during the first week in March. I know these have a long growing season, and need the best start as possible, but I am an advocate of not planting seeds too soon. Experts in growing super-hots might start them earlier than this, but only do so if you have the conditions to keep them healthy when the nights are still cold, even indoors. You may need artificial lighting too, don’t put yourself in a situation where they grow tall and straggly. You are better off planting a bit later and growing healthy plants. more on light here.

Generally the plants grew well, out of 7 plants there were a couple that didn’t seem to take and were slightly stunted, so these were relegated to the compost heap. The Carolina Reaper fruited a bit earlier than the Bhut Jolokias nearby, which is great, and generally had more fruit on them too. Like all of the super-hots these definitely respond to being given big pots and more room for root growth, you can get a pretty big plant if you give them a good chance in life. By big plant I mean up to 1.5m high, and 1m wide. I put one in a bucket sized pot, and got it to 1m. Put it in a barrel for something bigger, but don’t expect it to fruit quite as early, and consider where you might put it if you want to keep it over winter. Often it is best to keep things like this in a more manageable pot.

This unusual chilli, the chilhuacle negro, deserves a page of its own. It is a favourite of mine for a number of reasons; firstly its strange soft, brown, leathery feel is fairly unique, and secondly it looks quite spectacular when growing because of the shape of the plant. 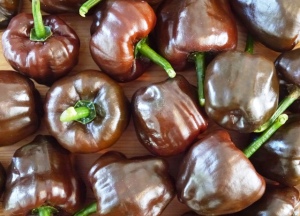 The fruits are about 4-5 cm cubed and ripen from green to brown, but they never firm up to that glossy, crunchy state that you would normally expect of a chilli. Instead they remain pliant and leathery with dull skin, as though they have been left on the plant too long and have started to dry out. 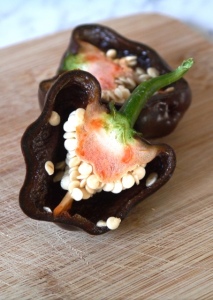 Linked to these characteristics is the ease with which they can be dried, in fact they already feel like half the job of drying is done before you pick them. They are naturally low in moisture, and with the matt skin, to completely dry them out is much easier compared to many other chillies.

Chilhuacle negro originate from the Oaxaca region of Mexico and are traditionally used dried, in a mole negro. They impart ‘dark flavours’, chocolate, tobacco and tannin and they aren’t that hot, maybe 2-3000 SHU, so you can safely use enough to make the most of these flavours without overdoing the heat. 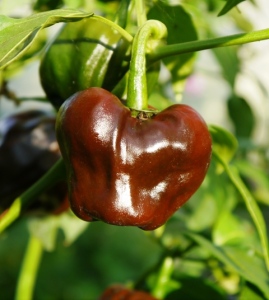 The plants, which grow to about 45 cm x 45 cm make quite a spectacle, and become laden with fruit, but remain compact. The stems branch frequently, with short inter-nodal length and quite unusually the stems can grow downwards, not bending over, but actually branching with strong stems growing down beneath the top of the pot. This gives the plant the appearance of a mesh globe, which, when combined with lots of brown fruit becomes quite decorative. 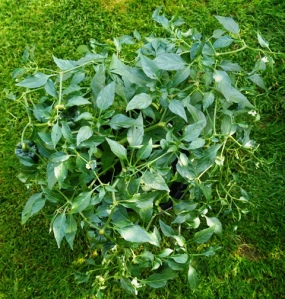 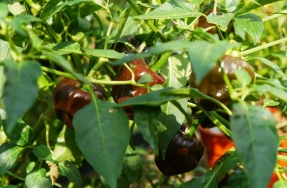 If you want to have a go at growing them you can get seeds in the UK from Nicky’s Nursery they are quite hard to come by otherwise. They germinate quite well, as I have often found, with no scientific evidence at all, that many brown chillies are more erratic than their red counterparts (chocolate habs, ancho mulato for example). Once the seeds have germinated the fruit take around 16 weeks to mature to brown and they are always eager to keep producing into the autumn.

One thing I found this year, and I mentioned this in a previous blog, https://growingchilliesbook.wordpress.com/2015/06/23/the-order-of-greenfly/ is that they seem to have attracted greenfly where other plants around them did not. There were a few chilhuacle negro plants scattered randomly around the greenhouse, and yet they all seemed to get infected where the neighbours remained greenfly-free. The early greenfly which noshed into the flower parts before I noticed them, caused a lot of the first fruit to be quite deformed. Maybe this is partly due to the strange dry and leathery nature of the chilhuacle negro fruit, but some of the affected ones not only divided, but the skins split open so you could see the seeds inside. Needless to say I had to pick these and discard them as soon as they started to grow to make way for some healthy un-greenflied fruit.